Adapting to The New Normal 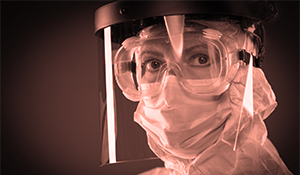 In light of the strange and difficult times we're all experiencing right now, we're taking a break from traditional marketing material in favor of content that sheds light on the crucial front-line activities of our customers. Please join us in recognizing their efforts as they adopt and adapt to The New Normal.

A few weeks back, with the COVID-19 cloud looming over our heads and businesses beginning to adjust to "the new normal," I reached out to some of my customers to check in and see how they were coping with doing their regular tasks amid the mindset of keeping their distance.

Being in the SaaS Security environment, I wouldn't be doing my job if I wasn't touching base with my customers to try and understand what they were going through now and how they were adjusting. Furthermore, how could I, as a trusted adviser, let other organizations know what was working, or at least let other people within the industry know they weren't alone in moments of confusion and crises that were all too frequent and common? This is what I learned from a few such phone calls:

Security staff in some hospitals were now asked to ensure that PPE supplies are kept under lock and key as people were "borrowing" them.

Instances of trespassing have increased as homeless people search for places to put their heads down; displaced from traditional shelters in some areas or simply reluctant to stay at government-provided facilities. One security manager said that, for some of them, the thought of staying in one spot made them volatile and difficult to manage.

Nurses and administrative staff are on higher alert as they see a rise in patients becoming disruptive, unruly or violent. Some say this is due to individuals becoming increasingly frustrated and irate when that are unable to see family or friends who have been recently admitted. This is why having a workplace violence safety training program is extremely important specifically in the healthcare and hospitality industry.

Additionally, there have been incidents involving individuals purposely coughing and spitting on security staff and public safety officers. This has been one of the most unnerving events for those on the front line. The security professional I spoke with expressed their concern around such immensely disrespectful behavior being weaponized against the very people trying to reduce instances of airborne transmission.

Whether it's people on the fringe becoming more desperate or opportunistic bad actors taking advantage of the current situation, there's been an increase in incidents of people breaking into isolated, newly unoccupied areas in the hopes of finding something of value.

These were difficult conversations to have. In the span of a single phone call, you could hear their emotions come through; saddened by what they saw, helpless to an atmosphere of chaos and confusion, afraid of not knowing what would happen to them while helping others, and pride in how they continued to keep people feel safe and secure during a period of unprecedented uncertainty.

There's very little positive news to take a way from all of this right now. But the one thing I want to highlight is the brave folks who still get out of bed every day to leave their families and deal with these issues, exposing themselves to the hazardous conditions inherent to their job, now made immensely more dangerous by COVID-19. Let's be aware of what's going on right now. Let's stay informed and safe. But let's not dwell on it. Instead, let's stay focused on the selfless activity of the officers, nurses, firefighters, doctors, and other front line staff out there. I've never been more proud to support their service.